How does a pharmaceutical company increase awareness and engagement in a highly regulated sector?

Being one of the world’s largest Pharmaceutical companies Boehringer Ingelheim is dedicated to the research and development of products, including prescription drugs that allow medical professionals to deliver the best healthcare to patients. @Boehringer, the official Twitter name for the company, operates within the highly regulated pharmaceutical industry and is limited in the way it may promote its brands and products.

One of the challenges faced by Boehringer was to increase the engagement and awareness of pulmonary diseases amongst healthcare professionals during a major industry conference. To Increase the awareness Boehringer wanted to engage the medical media, pulmonologists, general practitioners and digital opinion leaders in conversations about COPD during the European Respiratory Society Congress #ERS2013. 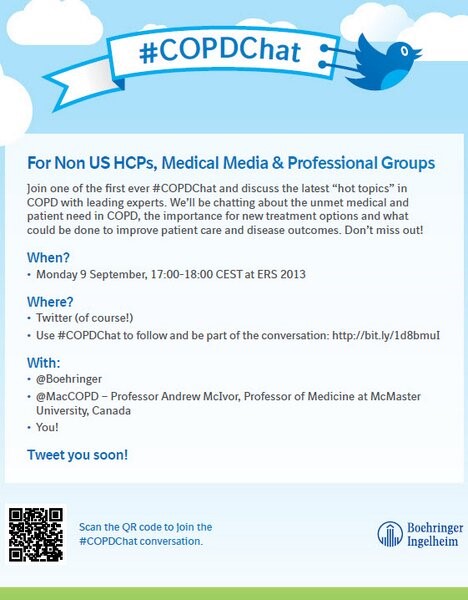 As a solution, a tweetchat was facilitated to trigger conversations about Chronic Obstructive Pulmonary disease (COPD). BI also used promoted tweets on Twitter to ensure messages appeared in relevant users’ search results and timelines raising wider awareness of the tweetchat.

This campaign by @Boehringer not only generated awareness of COPD, but also increased its corporate brand reach and influence through digital media. @Boehringer’s use of Twitter during the conference was picked up by the pharmaceutical industry press, which paid particularly attention to the tweetchat element. It praised the #COPDChat delivered by @MacCOPD calling him a digital opinion leader.

Events provide a great opportunity to engage your audience on Twitter. @Boehringer drove conversations before, during and after the event using a relevant hashtag. @Boehringer’s communications team operates in a highly regulated sector so it engaged all key stakeholders and worked in advance with them to approve Tweet content. Unexpected ideas often obtain the best results. @Boehringer was the first in the pharma industry to use tweetchats to encourage awareness and engagement within the medical community around a specific disease.

More Information on Boehringer Ingelheim use of twitter COPD during the European Respiratory Society Congress #ERS2013.

To maximise engagement, @Boehringer embedded a highly targeted invitation in its Tweet. It also introduced the hashtag #COPDChat to help users find and follow the Tweet chat conversation. This allowed @Boehringer to track and measure the reach and effectiveness of the campaign as it unfolded.

During the conference, @Boehringer used Promoted Tweets to drive targeted reach of its Tweet chat, using keyword targeting in timelines to reach people tweeting or engaging with Tweets containing keywords like “asthma”, “COPD” and “lung disease”.

This way, it ensured its Tweets rose to the top of the relevant timelines and were front of mind for its target audience when they were most receptive. During the campaign, @Boehringer encouraged community engagement, generated awareness of COPD and amplified its brand’s reach and influence.